The King’s Lynn Music Society is promoted by the King’s Lynn Musical Society, its original name when established in 1891.  It was reconstituted in 1996.  We arrange an annual series of eight monthly recitals and illustrated talks from September to May (excepting December).

We meet usually on the 3rd or 4th Wednesday of the month, in the Assembly Room of the Town Hall in Saturday Market Place, King’s Lynn, PE30 5DQ, opposite King’s Lynn Minster.  There are steep steps from the street to the venue but a lift is available. All meetings (except the AGM) start at 7.30pm and coffee is available from 7.00pm. 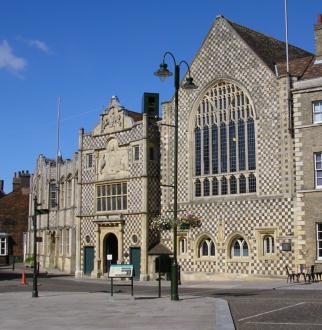 Those under 18 and in full time education and members of other societies affiliated to the Federation of Recorded Music Societies are welcome to attend without charge.  Music teachers are also encouraged to bring their pupils without charge.

Annual membership is £50. Visitors are welcome to attend a single meeting and will be invited to make a donation (£10 is suggested) at the door. Those under 18 and in full time education and members of other societies affiliated to the Federation of Recorded Music Societies are welcome to attend without charge.  Music teachers are also encouraged to bring their pupils without charge.

Further details may be obtained from the Secretary, by Email:  kingslynnmusicsociety@gmail.com 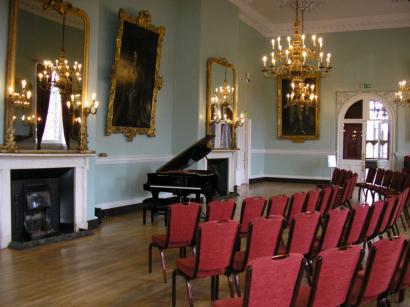 Emma Abbate and Julian Perkins have given keyboard duet recitals at many prestigious UK venues including the Royal Opera House, St George’s Bristol, Hatchlands Park and the Russell Collection. Engagements abroad have included the Mozart Society of America in Boston. They have recently released the second volume of Mozart's complete piano duets on period instruments for Resonus Classics. This album has been highly praised by BBC Music Magazine. Their first volume was described by Early Music Review as "exemplary", and represents the final recording made at Finchcocks Musical Museum. Future plans include the release of complete keyboard duets by Carl Maria von Weber on an original Viennese fortepiano for Deux-Elles in 2020.

The Neapolitan pianist Emma Abbate enjoys a demanding career as a piano accompanist and chamber musician. Described as "an amazingly talented pianist" by the leading Italian magazine Musica, she has performed in duo recitals for international festivals and concert societies in Salzburg, Boston, Lisbon, Naples, Ischia, and Poland, and at many prestigious UK venues such as the Wigmore Hall, Southbank Centre, Royal Opera House, St John's Smith Square, St George's, Bristol and at the Aldeburgh Festival, in addition to broadcasts on BBC Radio 3.

Emma is releasing a series of recordings devoted to 20th-century Italian vocal chamber music, the latest of which is Sera d’inverno: Songs by Ildebrando Pizzetti with mezzo-soprano Hanna Hipp for Resonus Classics. The disc has been highly praised by the Gramophone and was "Editor's Choice" in the June issue of the leading Australian magazine Limelight. Emma has previously recorded the world-premičre disc of Shakespeare Sonnets by Mario Castelnuovo-Tedesco with the BBC New Generation Artist Ashley Riches. A keen advocate of contemporary music, she has also recently released two discs devoted to works by Stephen Dodgson for Toccata Classics: world- premičre recordings of his cello and piano music with Evva Mizerska, and his piano quintets with the Tippett Quartet. The latter disc was named a Musicweb International Recording Of The Year 2017.

Based in London, Emma is a professor at the Guildhall School of Music & Drama and a staff coach at the Royal Opera House, Covent Garden. She has been elected an Associate of the Royal Academy of Music in recognition of her ‘significant contribution’ to the music profession. www.emmaabbate.com

Described as ‘exuberantly stylish’ by the Sunday Times, Julian Perkins is Artistic Director of Cambridge Handel Opera and Sounds Baroque. He has performed at the Salzburg Festival, Edinburgh International Festival and BBC Proms, and gained a wealth of experience performing with many prominent period instrument ensembles and modern orchestras including concerto appearances with the Royal Northern Sinfonia, Orchestra of the Age of Enlightenment, Orchestra of The Sixteen and Florilegium. In addition to appearing as solo harpsichordist for productions at the Royal Opera House, Welsh National Opera and Northern Ireland Opera, he has featured on the BBC Early Music Show and played at venues such as London’s Wigmore Hall, New York’s Lincoln Center and Sydney Opera House. An avid recitalist, Julian has broken new ground at over a dozen international festivals in giving concerts on the clavichord, with programmes that have included complete performances of J. S. Bach’s two books of Das wohltemperierte Klavier. Trips to the US have included recitals for the Mozart Society of America and the Boston Clavichord Society. His various recordings have been described as ‘monumental’ (American Record Guide), ‘a virtuoso showcase’ (The Guardian) and ‘exemplary’ (MusicWeb International).

Forthcoming conducting projects include John Eccles's Semele with the Academy of Ancient Music (to be recorded on AAM Records), and the world premičre recording of Stephen Dodgson’s opera Margaret Catchpole for Naxos. He is also a coach at the Royal Opera House, and has given masterclasses at the National Opera Studio and several music colleges. www.julianperkins.com

18/09/19     Charlotte Rowan violinist with pianist Charlotte Stevenson. Charlotte Rowan has gained recognition for her virtuosity and masterful command of her instrument and returns by popular request with her regular accompanist.

20/11/19     “Elgar by those who knew him.” Christopher Wiltshire from the Elgar Society East Anglian Branch gives an illustrated talk including a compilation of recordings by Elgar’s contemporaries.

15/01/20    Estevão Devides Classical Guitarist. Born and studied in Brazil he was selected by the Brazilian Ministry of Culture in 2013 to be part of a cultural exchange which included concerts at some King’s Lynn schools.

19/02/20     Emma Abbate and Julian Perkins Four hands at the Piano Emma and Julian have given keyboard duet recitals at many prestigious UK venues including the Royal Opera House and St John’s Smith Square.

20/05/20     Jamal Aliyev cellist. Born in Azerbaijan, Jamal studied at Yehudi Menuhin School and Royal College of Music making his BBC Proms  debut in 2017.  This event is supported by Countess of Munster Musical Trust.

Links to other local music events include: